Army School TGT PGT Salary:- Friends, after the Seventh Pay Commission by the Government of India, the salaries of Army Public School teachers have become much better. In addition to this salary, they are given other allowances and benefits. In today’s article, we will give you detailed information related to the salary and salary structure of TGT and PGT as per the rules of the Seventh Pay Commission. TGT and PGT examinations were conducted online by the Army Welfare Education Society in Army Public School. Through which about 8000 teachers from across the country were given the opportunity to become teachers in Army Public Schools. 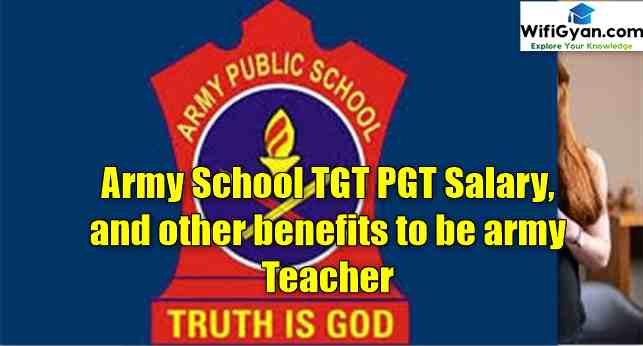 Teachers were recruited in the Army School by the Army Welfare Education Society Commission. Through this exam, about 8000 teachers in the country were given the opportunity to become government teachers. After the Seventh Pay Commission, there has been an increase in the salary of teachers working in the post of teachers in the Army School. After which they are being given an attractive salary as well as allowances and benefits. There are around 137 army schools in various cantonments and military stations across India. These schools are administered and restricted by local army officers. The teachers are recruited by conducting examinations every year through the Army Welfare Education Society in Army School.

PGT Salary according to experience

TGT Salary according to experience

The House Rent Allowance for all government employees is calculated according to the criteria given below.

After the Seventh Pay Commission, the Government of India has increased dearness allowance from 5% to 7%. Army Welfare Education Society employees are given 80% Dearness Allowance by the Central Government।

Travelling allowance is given to Army School TGT PGT

Approximately 24% of pension will be given to retired teachers by the Army Welfare Education Society Teaching Staff. If you also want to work as an army school teacher then you can also get a good salary through this government job.
Post Views: 217