Friends, when you talk about IAS and IPS, the only thing on our mind is that considered one of the highest officials of the country. We also think here that the powers of both positions are equal. However, in today’s article, we will discuss with you who has more powers in IAS and IPS. Along with this, we will also tell you what the responsibilities of IAS and IPS are. So let us start and try to tell you the difference between IAS and IPS. As we, all know that both IAS and IPS officers are the most important posts in a district. 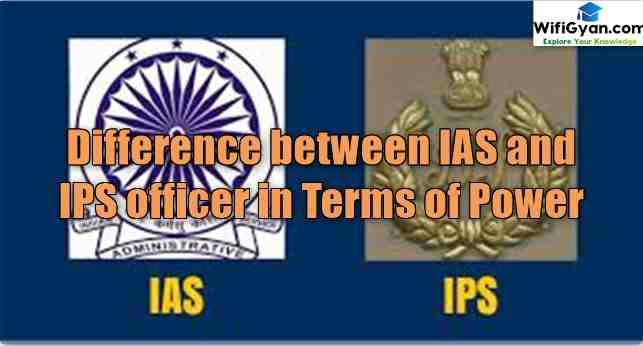 Powers and Responsibilities of IAS and IPS

Difference between IAS and IPS in Terms of Salary:-

IAS salary has also become much better than the seventh pay commission The salary of an IAS can range from ₹ 56100 to ₹ 250000 per month. This salary varies depending on seniority.

The salary of an IPS officer in India has become much better since the recommencement of the Seventh Pay Commission. IPS salary can range from ₹ 56100 per month to ₹ 225000 per month. The salary varies depending on seniority.

Training of IAS and IPS officers

IAS and IPS initial 3 months training, also known as foundation course Lal Bahadur Shastri is in the National Academy of Administration. After that, the IPS trainee sent to Sardar Vallabhbhai Patel National Police Academy Hyderabad where he completes his police training.

IPS training is more difficult as they taught more laborious tasks such as horse riding parade weapons etc. Sword to Honor candidates given to the top in IPS Training. While the candidates topping the IAS training awarded medals.