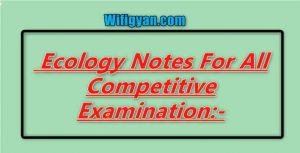 The word Ecology has been made from two words-Oikas (living place) and logos (study), which impulses that Ecology means the study of the living place. Letter Haeckel defined it as below-

The branch of Biology under which organisms (living beings) and their mutual relationship with surroundings (atmosphere) are studied is called Ecology.

Broadly Ecology can be divided into the two groups-Autoecology and Synecology.

The branch of Ecology in which only one type of species of the organisms is studied.

The branch of Ecology in which the entire community of the organisms of any specific region is studied.

The factors of environment, which directly or indirectly interact with organisms (living beings) are called ecological factors. These are of two types-

Under it, non-loving factors come into existence and the main abiotic factors are-

1. Light: The plants prepare their own food by the process of photosynthesis in the presence of light. The creatures directly depend on the plants for the food. Some other activities like locomotion activities in plants, seed sprouting, respiration, evaporation etc. are also affected by the light.

3. Humidity: Due to the presence of water-vapour the atmospheric air remains moist and humidity is directly related to the evaporation. If the humidity is low then evaporation is high and vice-versa.

4. Wind: The wid directly imparts its effect mainly in soil erosion, bending of plants, in pollination and in the scattering of the seeds etc.

5. Topographic: Topographical factors like the expansion of land, mountains, altitude, latitude etc affect the organisms too

2. Parasitism: Some organisms always depend on other especially for the nourishment and called parasite and dependents always damage the other. The fungi, bacteria, viruses etc are various parasitic microorganisms.

3. Commensalism: In this relation, organisms interact mutually in such a way that no loss or gain takes place between the organisms and up to some extent they mutually assist to each other. The example of this relation is Epiphytes.

The word Ecosystem was firstly pronounced and used by Tansley in 1935. The mutual relationship of an organism with surroundings and another organism among the organisms of any particular place is called Ecosystem. This is of two types-

A. Producer: The biotic component which prepares its own food comes under the category of producer and the ratio of carbon dioxide and Oxygen is also maintained up to a fixed proportion to remain the ecosystem intact. Almost all green plants are examples of a producer.

B. Consumer: The biotic component which consumes or utilizes the food prepared by the producer is called the consumer and it is of three types:

The animals like tiger, lion, leopard etc are tertiary consumers.

C. Decomposers: Under it, bacteria and fungi come which are frequent and main decomposers of almost all consumers and producers and diffuse them in the form of inorganic elements in the atmosphere. These decomposed residues easily mix up in the physical environment, consequently, green plants absorb these residues which are transformed into food. Again these green plants are consumed by the primary consumers and the cycle is continued.

Ecological classification of plants: E. Warming classified ecologically the plants into five groups given as below-

D. Plants of Physical dryness in the soil

E. Plants of active dryness in the soil.

The occurrence of unwanted physical, chemical and biotic changes which generally cause an imbalance in our ecology or environment through the air, land or water is called environmental pollution. The pollution may be either natural or artificial (man-made). The substances or factors through which changes occur are called pollutants generally pollutants have been divided into two groups-

A. Air pollution: The air is basically a mixture of oxygen, nitrogen, carbon dioxide etc and these gases have a definite ratio and the occurrence of imbalance in their ratio produces air pollution.

The source of pollution can be classified into two groups-

This is All about Ecology Notes For All Competitive Examination UPSC, PCS, SSC

Friends, if you need an eBook related to any topic. Or if you want any information about any exam, please comment on it. Share this post with your friends on social media. To get daily information about our post please Click The Bell Icon Which is Given Below.

Disclaimer
Wifi Gyan does not own this book, neither created nor scanned. We just provide the link already available on the internet. If anyway it violates the law or has any issues then kindly mail us: [email protected]
Post Views: 862