Law is one of the most respectable profession. There is no limit on success, but Your success depends on the knowledge. There are many professions that one can choose after a degree in law. Here in this article, I will share with you the complete details about the Topic, which is most searched on the Internet. Here you will get to know How to become Government Advocate in India. To get complete details about the process to become a government Advocate. Check out the entire article below. I have shared a sincere and genuine answer about this topic and the actual process of being a Government Lawyer. 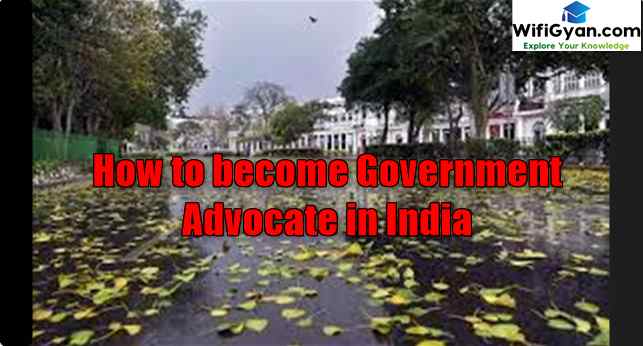 How to become Government Advocate in India:

To become a government Advocate, here are some required important eligibility Criteria that are mandatory to have. A candidate who has done Law from any bar council of India recognized Institute or University and has minimum age 21 or more than that etc. is eligible for the registration at the high Courts or lower courts in India.

To get the details about the registration process to India’s bar council, You must check our previous article. Or can also click on the link given below:

Enrollment process in the Bar Council of India full details

After the registration, You become a part of the Bar Council of India. Now you can officially practice at the high Court or Lower Court as Advocate and become eligible to apply for the Government Advocate or Public Prosecutor after some years of experience.

The process to become Government Advocate:

First of all, there is a fixed selection process for Government Advocates. The state government directly hires the and Every government appoints its lawyer during its ruling period. The selection or shortlisting of the advocate for the service are mostly done or suggested by the regular judges at the courts Later the Government approves the name.

The reference plays a significant role in becoming a government advocate. If you referred by any sessions judges or District Magistrate, You have high chances to get approved as Government Advocate for the five years. After the Shortlisting, you may have to appear for the Examination conducted by the UPSC and followed by Interview. Now let’s see the eligibility criteria which is required to have to apply for the Public Prosecutor.

How to become a certified Advocate in India. Step by step detail

Eligibility Criteria to be a Public Prosecutor:

There is some eligibility that I have told in the second part of the article. Here are two extra requirements for this which are Age limit and experience etc.

These are the only required that are required to apply to become Public Prosecutor in India. Wee, this is the complete process and Eligibility Criteria. If any advocate wants to be a government lawyer, he or she must have a good reputation at the courts and do proper Pairavi of the Selection Panel at a time of recruitment. Now let’s see the role of Government Advocate or Public Prosecutor at the court.

Role of Government Advocate in the Court:

A public prosecutor is the part of the state’s Judiciary or Judiciary process. They act in the charge in the case of Litigation, Appeals, and other procedure related to the law. They also assist the police personnel in their cases. Once a charge sheet filed in the court below by the Police personnel, the rest of the further process will work under the Public Prosecutor. They are working on behalf of the government.

We Provide recent Information about the competitive examination.