Indian Navy Sailor Salary: Aspirants, here as you are preparing to enter the Indian Navy as a big part of it you ahould be well aware about Indian Navy Sailor Salary and What is Navy SSR and AA Salary? All that what is required for an intutive and complete preparation you would get to read about it just over here. All about Indian navy sailor salary, and sailor salary slip etc. Scroll upto the end of the article to understand well about the total salary of sailor in Indian navy and other facts related to it. 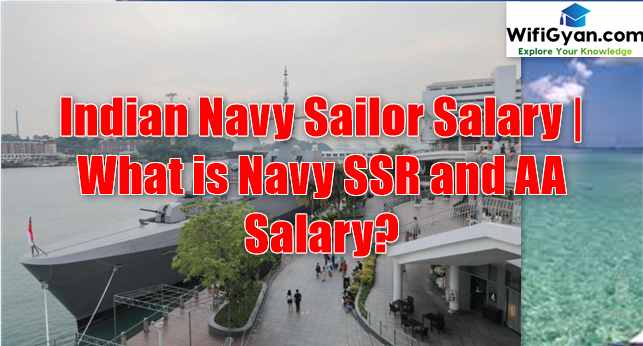 Coming towards the topic of your interest getting you all about the salary purposes so it would be easier for you to figure out whether you want to do a particular job or not. Not taking much of your time before coming towards the original topic of this article we would like to tell you some small details with respect to the Indian navy sailor post.

Looking forward to enter the Indian Navy? Being a sailor can be a sufficiently easier and worthy part of it. Straight forward a sailor is the one who takes the navy sails towards the shores hereby now when you try and be a part of the Indian navy you have to undergo a selection procedure. It has following steps:-

A candidate who has the wish to serve the country being a sailor in the Indian navy has the best opportunity now to do so and attain the same.

Total Salary of Sailor in Navy

Read the full article to understand it about in details. Each word of it mentioned here would be to tell you about the salaries, perks, promotions, selection procedure and also you would get to understand well about the life of a sailor.

The basic salary of a sailor in Indian navy is mentioned as below. All the allowances and all other perks are as below.

Starting from the basics you should know first of all about the salary offered to the sailors during training. Their basic stipened salary during training period is Rs. 5700/- month. Once after completing the training period a sailor in the Indian navy would be appropriately applicable for all kind of grade pay, miliatry service pay and the Group X or Group Y pay as applicable according to their division. Along with the stipened salary they are being provided they also have acess to all of such allowances. Also while preparing for such a tough competition you should know about other salary basics as well.

The sailors in Indian navy are classified into two classes:

These both groups have a stipened increase by 50% whenever the Dearness allowance incfreases by 50% that is to be paid on the revised pay band. The group X consists of the Artificer Apprentices (AA). While the other Y group consists of all other sailors like Senior Secondary Recruit (SSR), Matric Recruit and Non Matric Recruit. Here is all of it for you to learn about the total salary of sailor in navy.

That was all about the Group X to talk about but there is also a group Y which has a role to play in. This group consists of three divisions of sailors as mentioned in the article above. The salary and basics of the Group Y is below:-

Note: Other than the above mentioned salary and grade pay both the groups of sailors have different allowances and perks in their package as well. For more informations regarding all the allowances, salaries and perks of a Indian Navy Sailor you may check the joinindiannavy.gov.in

Being a Sailor in the Indian Navy means a lot to many. They serve the Country for entire their life. Hence, the Navy also provides them some perks and allowances along with their earned salaries in the Navy.

What is Navy SSR and AA Salary?

I hope we have provided you with all the information about Indian Navy Sailor Salary/What is Navy SSR and AA Salary? If you like this article and find useful then share it with your friends. also, feel free to comment in the below section. if you guys want to appreciate my afford please share my post with your friends by which they can also avail of my services. For any Private adds and other inquiry mail us at [email protected]