Bacteria are a class of microbes causing many deadly diseases in plants and animals. They are the disease-causing agent not only in Human Beings but also for all the other organisms that are living on the earth. Here Wifigyan has brought for you a List of Diseases Caused by Bacteria in humans. To know more about the Diseases Caused by Bacteria continue reading us and scroll down so as to protect yourself and your near and dear ones to become sick due to any such kind of Bacterial diseases. 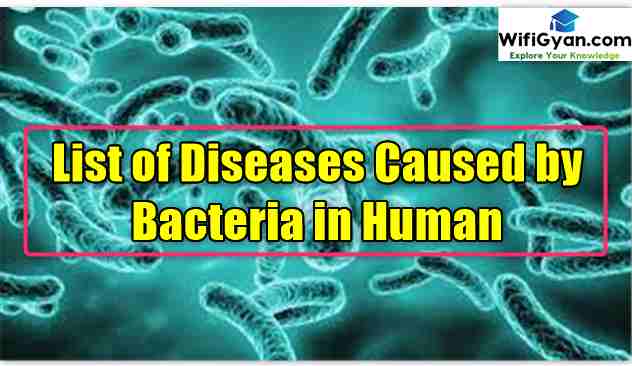 Bacteria was the first organism that evolved on earth. They are the Sole members of Kingdom Monera along with a few other prokaryotes namely Blue-green algae and PPLO(Mycoplasma). Hence to consider that the first cellular organism that evolved on earth was considered as Anaerobic Archaebacteria. These are a class of Bacteria that can survive in any physiological condition. Such that their life processes are maintained they intake chemoautotrophic mode of nutrition. Evolutionary processes later on led towards the formation of bacteria which were heterotrophic and survived over hosts which were capable of providing nutrition to them. Hence the infective bacteria came into being.

Bacteria are the only Prokaryotic organisms present in the atmosphere. Hence, they are categorized on many different bases. Here we are going to describe to you about some different kinds of Bacteria on the basis of Nutrition:-

On the basis of shapes and sizes, bacteria may be of following types:-

The pathogenic Bacteria around us in our surroundings may cause many different types of diseases in human beings. They are very harmful to us. Some bacterial diseases may cause deathly harm to human beings. We on our planet Earth are surviving only because we have successfully achieved victory over making our immune system superior as per the reach of these Bacteria. Elsewhere they are present in our surroundings all the time. Hence, to support our existence, the immune system has to work really efficient so as to save us from these Bacterial attacks.

Bacterial penetrations into our body is defensed each and every moment by different lines formed by our immune system. These lines of defense are the controlling mechanisms of our body which protect us just as the Soldiers over the Borderlines like LoC.

Hereby, today we have brought about a list of diseases caused by Bacteria in Human. Not only the diseases but their causative bacteria as well as the medication of that disease will also be mentioned down here. So keep Scrolling. Keep reading. Diseases Caused by Bacteria

Hope we have helped you understand about the diseases caused by bacteria in human.

This is all about the List of Diseases Caused by Bacteria in Human. If you like this article and find useful then share it with your friends. also, feel free to comment in the below section. For Better Preparation and Better Study material Please Visit Wifigyan.com on a regular basis. Here You will find all the books related to all subjects free of cost. My main aim to help the students who are not able to buy all the expensive books. if you guys want to appreciate my afford please share my post with your friends by which they can also avail of my services.