Here in this article, we will discuss this term NDA and will share with you the NDA Full form in Politics as well the NDA Examination etc. The NDA words also used in the polities which we may not have paid attention to that.

NDA Full Form: The NDA is one of the most common names that we have heard much time and only know that the NDA is Just exam. Here in this article, we will discuss this term NDA and will share with you the NDA Full form in Politics as well the NDA Examination etc. The NDA words also used in the polities which we may not have paid attention to that. Here today, your all doubts regarding the NDA full form would be clear. Check out the complete article below to get all the details regarding this. 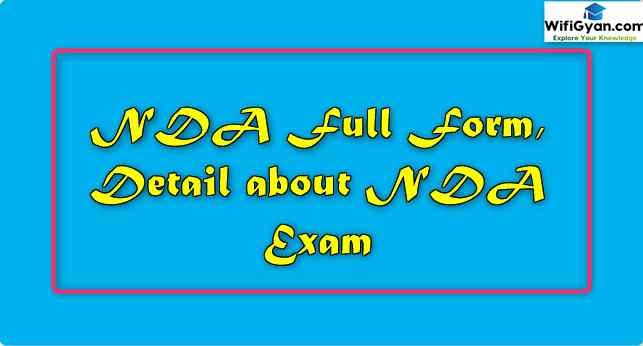 The NDA full form is the National Defence Academy while in the Politics it is National Democratic Alliance. Now let’s see the complete details about the NDA Examination that is conducted for the selection of the candidates into the Indian Armed forces like Indian Army, Indian Navy and Indian Airforce etc.

A candidate who gets selected in the academy get trained for three years and after they join their respected wings: Army, Airforce or Navy etc. whichever they choose, and they get trained for two years over there. In these three years, NDA prepares the candidates to be a warrior. They get the Basic Military Training for one year, and after that, they get the advance military training etc.

To get admission to the NDA (National Defence Academy), There are specific criteria. Now let’s see the complete process to join the academy.we will discuss now the required eligibility criteria, Selection Process and all other details etc.

These are the required eligibility Criteria which is mandatory to have to apply for this. To apply for this, you can visit the official website of the UPSC www.upsc.nic.in because the UPSC conducts the written exam. Now let’s see the complete selection process to this like examination and Interviews that one has to clear to join the academy.

The selection of the candidates into the academy is based on the Written Examination and Interview. All the candidate will have to appear for the written examination which is conducted by the UPSC (Union Public Service Commission)twice in a year. Those who would clear this, they will proceed for the SSB Interview and then Medical examination etc. Easily, one will need to pass:

To become an officer in the Indian Armed forces, It is mandatory to clear the SSB Interview, and There is no way to get into the service as an officer without SSB Interview. The SSB Interview is 5 Days long Interview, and each you will appear for the Different types of test, and you will be given marks according to the performance. At last, the top-notch candidates who would have performed overall better will be selected.

Now let’s see the details about the medical Requirement for the NDA (National Defence Academy). To join the Indian Armed forces, the Basic Requirement is to be fit and healthy. All the candidates who want to join the academy and want to make their future in the defence. Here are some basic requirements to apply for the NDA.

These are some basic requirement of physical to apply for the written examination. All the candidates who want to apply for this, they must have their medical examination done before starting preparation for this. it hurts very badly .if you clear all the phases of selection and later get rejected in the medical exam. There are many private hospitals where you can have your medical test done as per the Defence standard.

NDA (National Democratic Alliances)Do not get confuse between the NDA Full form of Politics. There is no relation between this NDA Exam with the NDA of Politics. Hope, You get all the details about the NDA Examination.

Once you get into the academy, All your expenses will be born by the government and you will not need to pay a single, even you will get Stipends while you will be on training. Prepare yourself better for the exam.