All about Param Vir Chakra 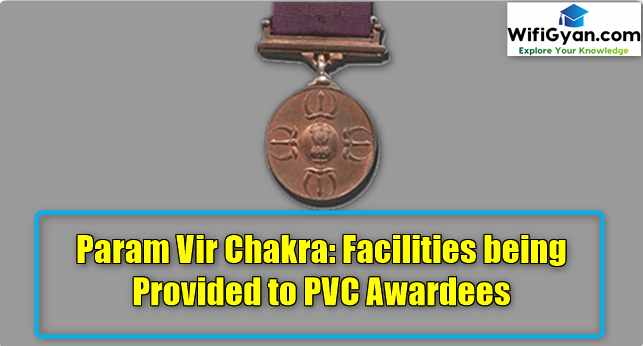 What is Param Vir Chakra:

It is a gallantry Award that is presented by the Honorable President of India to the Soldiers and officers of the Indian Armed forces for their excellence bravery and self-sacrifices. There are only 21  people who have received this award yet and out of 21 awardees, 20 are from the Indian Army and one is from the Indian Airforce.

This award is given for the excellence bravery during the wartime, It is considered as India’s best gallantry award.

The PVC is circular in shape and up of Bronze, the Size of the Medal is one and three inches in diameter. On its center, The Param Vir Chakra will be embossed. The Colour of the ribbon is plain purple. This medal has its own value and it is very to be that one person to get this honor on the behalf of the nation.

Facilities that are provided to the Param Vir Chakra Winners:

Facilities provided to PVC Winners: There are many facilities that are provided to the Param Vir Chakra. Here are the following Monetary allowances are payable by the respective organization to the recipient of Gallantry Medal and after his death to his wife in terms of Rules 5 of the Rules governing the grant of Medal.

There are also some minor allowances that are given to the Awardees like:

The Awardees of the PVC are the real heroes of our nation and out of 21 winners only two are still on duty and rest of 19 awardees sacrificed their life for the nation. They were the warriors and it is very tough to a warrior. We should always respect our Armed forces. they always do their best for the nation.

This is all about the Param Vir Chakra and Facilities provided to PVC Winners. If you like this article and find useful then share it with your friends. also, feel free to comment in the below section. if you guys want to appreciate my afford please share my post with your friends by which they can also avail of my services. For any Private add and other inquiry mails us at [email protected]gmail.com