Gandhi Ambedkar Pact:- In today’s article, we will discuss various aspects related to Ambedkar and Poona pact 1932, apart from this, we will also tell you what were the differences between the varna system of Ambedkar and Gandhi. We will see the significance of Poona Pact in Indian society and Poona Pact 1932 Impact. Why Poona Fact 1932 was important for Dr Ambedkar for the upliftment of Dalit Society. 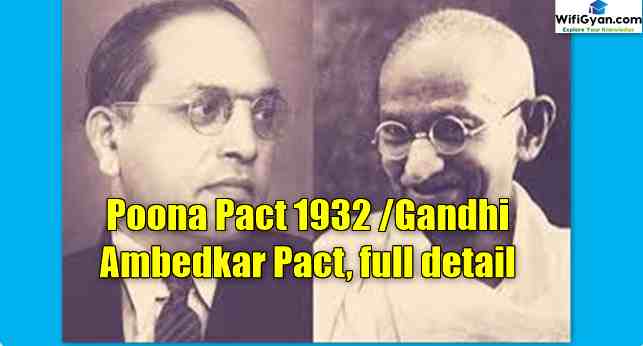 On 24 September 1932, Dr Bhimrao Ambedkar and other Hindu leaders tried and made an agreement between Swarna Hindus and Dalits. The Pact was named the Poona Pact 1932. As per this agreement.

Difference between Gandhiji-Ambedkar on varna system

Some scholars believe that the ideology of Mahatma Gandhi and Ambedkar was different from each other but this is not true. Bhimrao was not only an admirer of Mahatma Gandhi but also his follower. Certainly, there were differences between the two on some subjects, but their purpose was only for the welfare of human beings. An example of this can also be seen in the subject of untouchability, both of whom believed that they are like a blot in society. But both the scholars were far apart from untouchability. Dr. Bhimrao Ambedkar was the creation of modern India along with studying political, social, and caste views. Dr Bhimrao Ambedkar’s opinion and ideological differences to Mahatma Gandhi’s opinion on the untouchability.

The background of Dr. Bhimrao Ambedkar