SSC CHSL Salary of LDC: Staff Selection Commission conducts the Combined Higher Secondary level. Here in this article, I will share with you the complete details about the examination and SSC CHSL Salary and promotion of SSC CHSL, etc. To get complete information about this, check the complete article below. I have given all the details about the Selection process and all the important information regarding the Exams and process or procedure etc. I have tried my best to give you all the possible information about the SSC Combined higher secondary level examination. 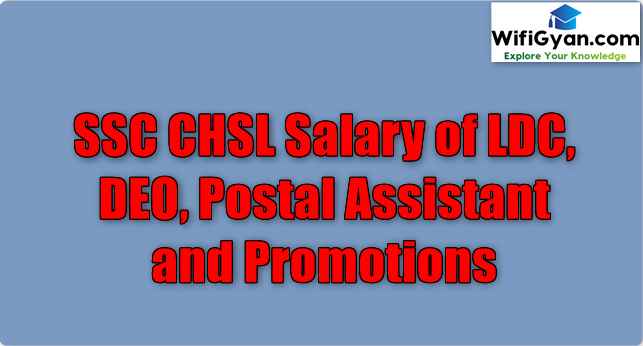 All the candidates will need to clear both phases of selection. The shortlisting of the candidates for the Descriptive Paper will be done on the basis of the exam marks scored in Computer-based Examination.  It is mandatory to clear both phases of exams individually. Once you clear these two phases of selection, you will appear for the Typing Test or Skill test, etc. So, In an easy way the selection process would be like this:

For the complete syllabus of the Computer-based Written Examination and Descriptive Paper. You can check the official website for this. We are here to tell you the Salary of SSC CHSL and after that, we will see the Promotion of SSC CHSL and SSC CHSL Salary of LDC

The Salary in any Service always does matter a lot for any person. Here I will tell you the salary of Staff Service commission combined higher Secondary level Examination. The salary in any service always depends on teh types of duty and nature of the work of an individual person. The Basic SSC CHSL Salary of LDC may get the same. Here we will the complete salary of SSC CHSL.

The salary in all Government Sectors has got increased after the 7th Grade Pay Commission. The basic salary of posts that one will get after getting recruited from the Staff Selection commission combined higher secondary level will be around 26,068/- per month to 35,576/- per month.

The Salary in all the government sectors, as well as private sectors, depends on the responsibility and nature of work, etc.  Here are posts that one will get after getting recruited through the Staff Selection commission combined higher secondary level Examination and their salary etc.

There is a fixed promotion pyramid for the candidates who get recruited through the Staff Selection Commission CHSL (Combined Higher Secondary level). Here is the following post that one can get promoted on:

These are the following post that one can get promoted to. This is teh fixed Pyramid structure of promotion. the Promotion of any candidate always depends on the performance on duty and nature of that candidate while working. There is another way to get promoted which is through promotional Exams.

The Salary of SSC CHSL Each post after the Promotion or right after the joining. I  have given the above. You can check the complete list of salary above.

You have to prepare yourself in a hard way to beat the competition. The competition is too much in this. You can check the complete syllabus of the examination on the official website. There are many books available in the market for the preparation of this examination, you can prepare through those books or you can also prepare through some online Study Material for SSC CHSL. It may cost you less.

Solve the previous year Question papers as much you can to get better practice for the examination. prepare as much better as you can.

This is all about the SSC CHSL Salary and Promotions. If you like this article and find useful then share it with your friends. also, feel free to comment in the below section. if you guys want to appreciate my afford please share my post with your friends by which they can also avail of my services. For any Private add and other inquiry mails us at [email protected]