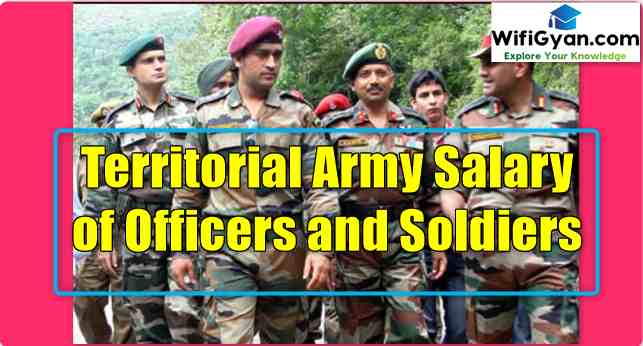 The Selection of soldiers may seem easy but the Physical Fitness Test of this is the toughest one to get recruited through. In the Common entrance test, you will be asked a very general question, this test conducted just to check the basic knowledge of the candidates. we are here to see the salary of officers in the Territorial Army. You can check the complete salary Structure and key Benefits or Allowances that one officer gets into the Service.

The Starting Salary of Territorial Army Officer is around 67,600/- per month. This is just an average salary they also get Military Service pay of 6,500/- per month which is after the salary. In the Service, they get paid for almost everything like ration, personal Expenses, Fuels, etc and many more.

Now let’s see the Allowances that the Indian Territorial Army officer gets in the service. Here are some amazing benefits and allowances that officers get:

They also some benefits of being in the Service with territorial Army India. Here are the allowances that Soldier’s get in the Indian Territorial Army:

The Allowances of Soldiers is a bit less as compared to the Indian territorial Army Soldiers but they get paid well for their job. The Salary of soldiers increases when they get posted to any high-risk areas.

This is all about the Territorial Army Salary of Officers and Soldiers or Territorial Army Officer Salary.  If you like this article and find useful then share it with your friends. also, feel free to comment in the below section. if you guys want to appreciate my afford please share my post with your friends by which they can also avail of my services. For any Private add and other inquiry mails us at [email protected]