Power of President of India

The President is the first person in the country. He/she has a lot of commanding power that he can command in one say. We are not aware of most of the power. Here in this article, I am going to share with you the complete details about the Indian President’s power and especially What is Veto Power of President of India. I have discussed this in detail and have shared all the information about this and types of the Veto power of Indian president. Check out the complete article below to get complete information about this. 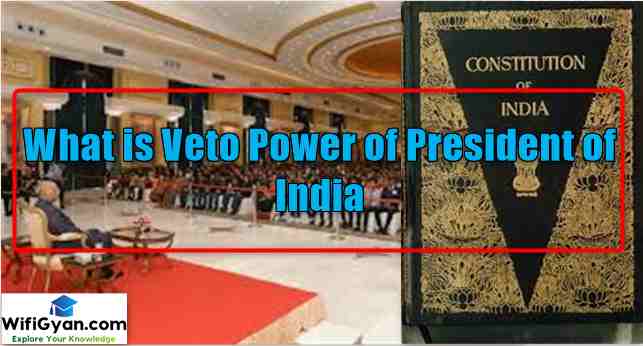 What is Fundamental Duty in Indian Constitution

What is Veto Power of President of India:

In an easy way, the veto power is the special power of the Indian President. When a bill passes in the Indian Parliament, It can not become an Act without the President’s permission. The president of India has the power to approve the bill to become an Act or can reject that bill. This power of the president is called Veto Power.  Now let’s see the types of Veto Power of Indian President.

There are basically three types of the Veto power of the president and each type is different and gives special power in it under Article 111.

Let’s see the details of the Absolute Veto, Suspensive veto and Pocket veto Powers in detail.

The fact about the absolute veto is: when the president of India uses the Absolute veto, He/she rejects the bill and it does not become Act.  Even after it is passed by the parliament of India. The president uses the veto power in the condition:

The first time Absolute Veto was used by the President Dr Rajendra Prasad in 1954 and last it was used by President R Venkataraman in 1991.

Borrowed features of Indian Constitution from other countries

The Suspensive Veto is used by the president of India when he returns the bill to the parliament for the reconsideration.

This rule was taken from the United States of America but the US President has to act on the bill within 10 days but the Indian President has no time limit.

The Veto power was last used by President Zail Singh in the year 1986. The president cannot use the Veto Power in case of Constitutional Amendment Bill.

Article 201 of the Constitution about the rule of the President in State’s Bills. It clearly states that the president has 3 choices in this condition.

This is the Veto Power of the President of India. He has also many commanding power that he can give in one say. There is no one above to counter that order.

We Provide recent Information about the competitive examination.

Childhood and Growing up Pdf Download for B.ed in Hindi and English

National Women’s Day: When and Why We celebrate Women’s day