Home » GK/GS » Who discovered Electron Proton Neutron? How to calculate it

Electron Proton Neutron:- During the past hundred years, scientists have made contributions, which helps in the development of the modern theory of atomic structure. The work of J.J. Thomson and Ernst Rutherford actually laid the foundation of the modern picture of the atoms. It is now discovered that the atoms contain several particles called some atomic particles like electrons, protons, neutrons, positrons, neutrino, meson, etc. Out of these particles, the electron, proton, and neutron called fundamental particles and are the binding blocks of the atoms. 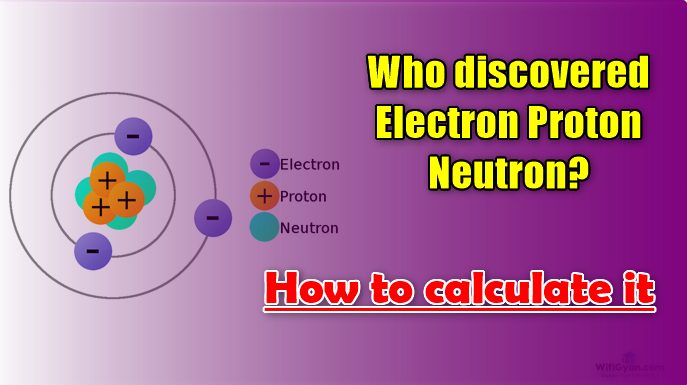 The nature and existence of electrons established by experiment on the conduction of electricity through gases. In 1859, Julius Plucker started the study of the conduction of electricity through gases at low pressure in a discharge tube. The air almost completely removed from the discharge tube (pressure about 10-4 atmosphere). When a high voltage of the order of 10000 volts or more passed across the electrodes. Some sorts of individual rays moved from the negative cathode to the positive electrode. Since,  The negative electrode referred to as cathode these they called cathode-ray further investigation word made by W. Crooks, J. Perrin. J.J. Thomson and others. Cathode rays cause the following properties-

With the discovery of electrons, Scientists started looking for positively charged particles which where naturally respected becomes matter is electrically neutral under ordinary coordination. the first experiment that led to the discovery of the positive particle was conducted by Goldstein in 1886. He uses a perforated cathode in the modified cathode ray tube. it was observed that when a high potential difference was applied between the electrodes, not only cathode rays produced but also are new types of rays were produce simultaneously from a node moving towards the cathode and passed through the whole of the canal of the cathode. These rays were termed canal Ray, sense, these pass through the canal of neck cathode. This named indoors as this originates from the anode. The following characteristic of the positive rays.

JJ Thomson made accurate measurements of the charge and the mass of the particles obtained in the discharge tube containing hydrogen, the lightest of the gases, in 1906. These particles found to have the e/m value as +9.579 x 104 coulomb/g. Rutherford renamed the positive particles in 1911. The protons carries a charge +1.602 x 10-19 coulomb, i.e. one unit positive charge. The mass of the proton thus can calculate.

The mass of the proton in AMU (Atomic Mass Unit)

The discovery of neutron was actually made about twenty years after the structure of atoms was elucidated by Rutherford. Atomic masses of different atoms could not be explained if it was accepted that atoms consisted only of protons and electrons. Thus, rutherford suggested in 1920, that in atoms, there must be present at least of the third type of fundamental particles which should be electrically neutral and forces mass nearly equal to that of the proton. They proposed the name of such fundamental particles like the neutron. In 1932, Chadwick bombarded beryllium with a stream of Alpha particles. He observed that penetrating radiations were produced which were not affected by electric and magnetic fields. This radiation considered as neutral particles which were called neutrons the nuclear radiation can be a source as-

Friends, today we have given information about the discovery of electron-proton neutrons and how to calculate their mass. Hope you like today’s information. You must tell your opinion in our comment box section and share this article with others.